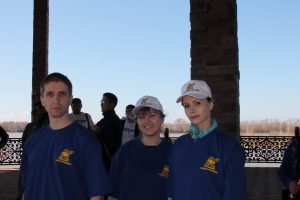 On April 25, 2018, in the framework of the celebration of World Labor Day, on the Central Embankment of the city of Pavlodar, there was an open race in athletics among runners, which was attended by representatives of many leading enterprises of the city, such as: «Kazenergokabel» JSC, «Pavlodar Petrochemical Plant» LLP, «Aluminum of Kazakhstan» JSC, «SAEM» LLP, «Kaustik» JSC, «Krendel» LLP, «Kazakhstan Electrolysis Plant» JSC, «KSP Steel» LLP and others. The plant was represented by: Solodyagin Alexander – a software engineer, Bylkova Susanna – a declarant of the production support department and Breus Elena – legal adviser of the legal department. The race was held in different age categories:

Susanna and Elena fell into one age category – «Women from 18 to 39 years old». In total, there were more than 20 participants in this category, and each wanted to bring victory to for her enterprise. But our girls, having shown their perseverance and the will to win, overcame this difficult path with a large margin. Alexander ran a distance of 4 km in the age category – «Men up to 39 years old». In this category, competition to him were more than 50 participants. The race was very tense. With a slight lag, Alexander finished 15th with a score of 17 minutes 53 seconds. Participants were greeted at the finish by our fans, who were an additional incentive for them to achieve victory. According to the results of the race, the winners were Bylkova Susanna – II place, Breus Elena – III place. The winners of the marathons, who took first, second and third places, were awarded with certificates and valuable prizes: medals and certificates for the purchase of household appliances in the amount of 30 000, 20 000 and 10 000 tenge. As a result, participants and fans of the race were have with positive emotions and great mood for the whole day.